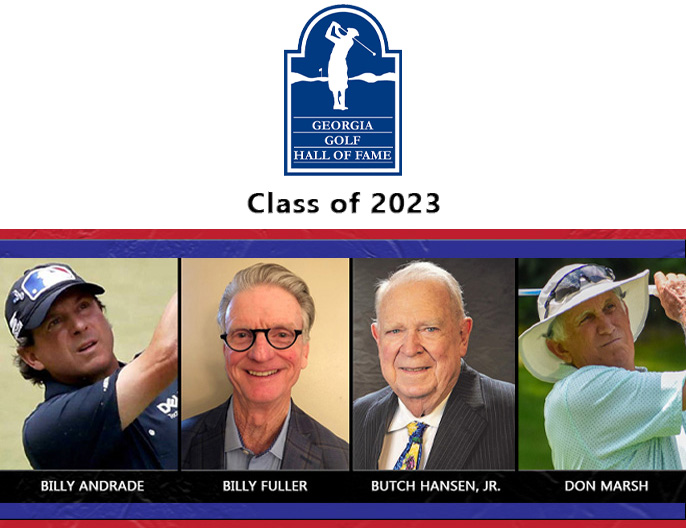 The GSGA is pleased to announce the Georgia Golf Hall of Fame Class of 2023:

Billy Andrade is a well-known professional golfer and winner on the PGA TOUR and PGA TOUR Champions, who has brought honor both to the game and to the Atlanta community for more than three decades.

Born in Bristol, Rhode Island, Andrade attended Providence Country Day School, where he found success early as a junior golfer. He would not only compete in, but win several national junior events, including the Junior PGA Championship in 1981. Andrade won back-to-back titles at the National Insurance Youth Classic Championship (1980-81). Also in 1981, he was the top-ranked junior golfer according to Golf Digest.

Andrade moved to Winston-Salem, N.C., in 1982 to begin what would become a distinguished collegiate career at Wake Forest University as an Arnold Palmer Scholarship recipient. As a Demon Deacon, Andrade helped lead his team to the 1986 NCAA National Championship, while earning an All-Atlantic Coast Conference (ACC) selection four times, third-team All-America honors in 1984, and honorable mention All-America status in 1985 and 1986.

After a successful college golf experience, which included earning a degree in Sociology, and winning many amateur events, Andrade moved to Atlanta and joined the PGA TOUR in 1988. Between 1991 and 2000, he won four times. His first two titles came back-to-back in 1991 at the Kemper Open and the Buick Classic. He began competing on the PGA TOUR Champions in 2014, where he currently has three victories – Bass Pro Shops Legends of Golf, Boeing Classic, Charles Schwab Cup Championship – all in 2015.

Off the golf course, Andrade has been recognized for giving back to his community through charity. As an ambassador for East Lake Golf Club, Andrade, along with Stewart Cink (Georgia Golf Hall of Fame member), hosts the East Lake Invitational. This charity pro-am each year raises funds for the East Lake Foundation and its continued revitalization of the neighborhood in Atlanta.

His commitment to charitable giving resulted in him receiving the 2022 Payne Stewart Award. This honor is presented annually by the PGA TOUR to a professional golfer who best exemplifies Stewart’s values of character, charity, and sportsmanship. Andrade was the 25th recipient of this award.

Billy Fuller, the former superintendent at Augusta National Golf Club and current owner of Billy Fuller Golf Design, is a mentor to many in the industry serving as an educational speaker across the country.

Born in Louisburg, North Carolina, Fuller grew up playing in local junior tournaments before competing on the golf team at Louisburg High School. He then enrolled at North Carolina State University in Raleigh, where he studied civil engineering for three years before earning an associate degree in turfgrass management in 1972.

After graduating with an interest in agronomy and turfgrass research, Fuller spent the next 14 years as a superintendent. From 1972 to 1981, he held the superintendent or director of agronomy position at various courses in South Carolina, including Seabrook Island Resort, Wildewood Country Club, Palmetto Dunes Resort and Kiawah Island Resort. He moved to Georgia in 1981 for the opportunity to serve as superintendent at Augusta National Golf Club.

While at Augusta National (1981-86), Fuller would develop the cooling and heating unit for the 12th hole, which would keep the frost off during winter months and maintain soil temperatures during hot summer months. In 1981, he would lead the conversion from overseeded Bermudagrass to Bentgrass.

It was during his time at Augusta National that Fuller developed what would become known as ‘Billy Bunkers’, a specification for constructing golf course sand bunkers. After years of additional research, this method of bunker construction would be used all over the world and reduce bunker repair work by 80%.

After his stint in Augusta, Fuller turned to the design side of the industry and joined Cupp Design. He worked alongside Georgia Golf Hall of Fame member Bob Cupp for 20 years (1986-2006) as a design associate and senior agronomist, where he worked on more than 100 new courses. In 2006, Fuller founded his own firm, Billy Fuller Golf Design.

He has been a member of the Georgia Golf Course Superintendents Association (GGCSA) for more than 40 years. He was a past member of the board of governors for the American Society of Golf Course Architects. In 2016, he was inducted into the GGCSA Hall of Fame.

Fuller has given his time back to the industry by serving as guest speaker at educational seminars at many local, state, and national Superintendents and Club Managers gatherings. He formed a non-profit, Golf Gives, which raises funds for local charities while promoting golf through local media.

Butch Hansen, Jr., is a PGA golf professional who has devoted his career to serving the game and giving back to the golf community through charitable efforts, elevating junior golf programming around the state.

Born in Miami, Fla., Hansen moved to Virginia as a junior and attended high school at Granby High School in Norfolk. He enrolled at the College of William and Mary in Williamsburg and captained the golf team (1961-63), where he was the number one player in 1961. After college Hansen served in the U.S. Navy, won 20 Navy golf tournaments, and was a member of the All-Navy Golf Team and All-Service Golf Team in 1964.

The next few years Hansen would be instrumental in bringing together state organizations to benefit the golf community. In 1973, he led a joint effort to bring together the Georgia State Golf Association (GSGA) and the Georgia PGA to form the Georgia Junior Golf Foundation, where he would serve as its first president. Then in 1977, Hansen assisted in the founding of the Atlanta Junior Golf Association, serving as its first president as well.

Brookfield West hosted the Georgia Open Championship in 1974, which Hansen served as the general chairman and tournament director. He secured a total purse of $26,000, which was the largest this event had seen. A year later in 1975, the purse grew to $33,000 with a record attendance of 30,000 spectators. Proceeds were donated to the Georgia Junior Golf Foundation. Hansen would garner praise from his peers and the media, often described as a spiritual philanthropist for his efforts in giving back to the community through golf.

His next endeavor came when he served as tournament chairman and host professional for the Lady Tara Classic/Lady Michelob on the LPGA circuit, from 1977 to 1985. After declining in interest in previous years, under Hansen’s leadership and guidance, the event raised thousands, all benefiting the Georgia Special Olympics, while at the same time becoming a favorite event to the LPGA players and fans alike.

Along with mentoring many PGA professionals who would go on to achieve success of their own, Hansen has been honored and celebrated numerous times over the years. In 1996, he was the Georgia PGA North Chapter Professional of the Year. He was honored by the Georgia Athletic Hall of Fame as Georgia’s Sportsman of the Year in 1975 and is a member of the Granby High School Sports Hall of Fame.

Don Marsh is a lifelong amateur golfer who has been a force on the senior circuit in Georgia for a many years and has given back to the game through volunteering.

Born in Dayton, Ohio, Marsh attended Colonel White High School, before enrolling at Ohio State University in Columbus in 1961. While at Ohio State, Marsh competed on the golf team and was captain in 1966. After college, Marsh served in the U.S. Army as a helicopter pilot in the Vietnam War. Once his service ended, he began working for IBM. Over the next several years, he would take on roles in sales and marketing.

In 1985, Marsh moved south to Georgia and joined Rivermont Golf Club in Johns Creek. His professional life continued with IBM in consulting services, which included projects such as ticketing for the 1996 Summer Olympics in Atlanta. His golf game also continued, as he quickly started winning multiple club championships at Rivermont.

Once Marsh became eligible for senior golf, his trophy case started filling up rather quickly. As a regular competitor in Georgia State Golf Association competitions, his name would more times than not be featured towards the top of leaderboards.