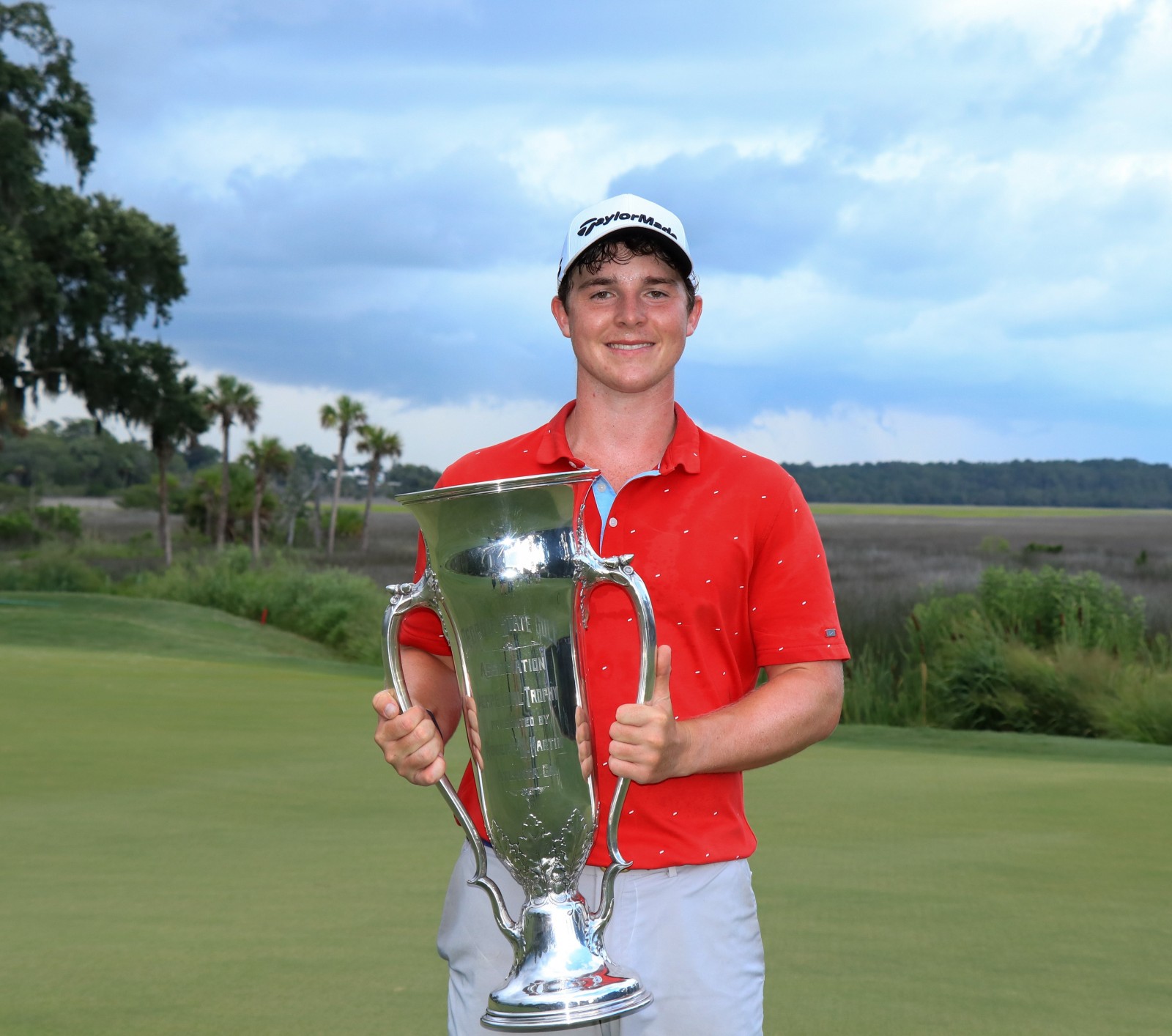 SAVANNAH - William Love of Atlanta posted a 4-over 76 over his final 18 holes and held on to win the 101st Georgia Amateur Championship by two strokes at The Landings Club-Deer Creek. The championship took place July 7-10.

Love, an 18-year-old recent graduate of the Westminster School in Atlanta, had to finish the third round Sunday morning due to severe weather delays on Saturday. He began the final round with a four stroke advantage over Billy Abdow of Duluth. After a birdie on the first hole of the final round, and a bogey by Abdow on his first hole, Love's lead grew to six. Love and Abdow both made birdie on the fifth and seventh holes, giving Love a six-shot lead with nine holes to play.
Love found trouble on the back nine. After a double-bogey on 11, and bogeys on 12, 13 and 14, the lead fell to two strokes with four holes to play. He made par on 15, 16 and 17. More trouble came on the par 5 18th hole with a double-bogey. Abdow and Logan Perkins of Locust Grove and John Daniel Culbreth of Thomasville were chasing Love, but over-par scores for each of them resulted in Love hanging on to win the Robert H. Martin Trophy by two strokes. Love's final tally was 8-under-par 280 (69-67-68-76).
Love is set to begin his collegiate golf career this fall at Duke University.
Abdow finished with runner-up honors at 6-under-par 282 (73-69-66-74), and Perkins finished third at 5-under-par 283 (71-70-68-74). Two players tied for fourth at 4-under-par 284, including Bruce Murphy of Johns Creek (76-73-66-69) and Culbreth (71-69-70-74). Nate Gahman of Leesburg, the reigning Georgia Mid-Amateur Champion, finished sixth at 3-under-par 285 (72-69-70-74). Rounding out the top 10 on the final leaderboard were four players tied for seventh at 2-under-par 286, including Thacher Neal of Helen (71-75-69-71), Caleb Greiner of Woodstock (71-71-71-73), Carter Loflin of Duluth (72-70-74-70) and Evan Thompson of Statham (67-71-72-76).
In a week ravaged by severe weather delays, final round Sunday was the only competition day not suspended. Once 36 holes were finally completed, 62 players made the cut at 5-over-par 149 and better.
Love was exempt into the 2022 Georgia Amateur Championship by finishing tied for 10th at last year's state championship. The top 20 finishers of this year's event are exempt into the 2023 edition. The 102nd Georgia Amateur Championship will take place at Rivermont Golf Club in Johns Creek.

Format and Schedule
The format is 72 holes of individual stroke play with the field cut to the low 60 players and ties after 36 holes.

Eligibility
Entries are open to male amateur golfers who belong to a GSGA Member Club and are residents of Georgia.

Event History
The Georgia Amateur Championship began in 1916 and has been contested at 29 different GSGA Member Clubs in 20 cities. This year is the 101st playing of the state championship. Beginning with 14-year-old Bobby Jones, who captured that first title in 1916 (still the youngest Amateur champion), there have been 74 different winners in the history of the event. Champions Tour player and two-time U.S. Senior Open champion Allen Doyle of LaGrange lays claim to the most titles (6), won between 1978 and 1990. Macon’s Arnold Blum pocketed five titles from 1946-56. Legendary Atlanta amateur Danny Yates has three championships to his credit – 1977, 1989 and 1996. Colin Bowles of Albany won the Centennial Georgia Amateur Championship in 2016, and Luke Schniederjans took home the trophy in 2020 at Atlanta Athletic Club (Highlands) in Johns Creek.