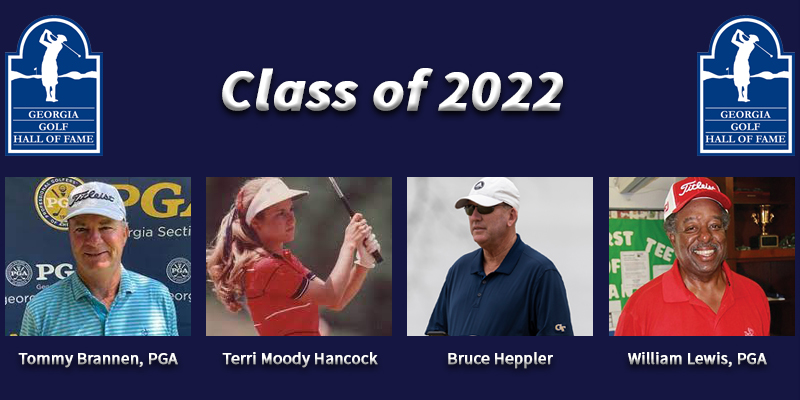 The GSGA is pleased to announce the Georgia Golf Hall of Fame Class of 2022:

Tommy Brannen, a well-known club professional with a successful competitive record and the longtime PGA Master Golf Professional at Augusta Country Club, has been selected for induction into the Georgia Golf Hall of Fame.

A native of Marietta, Ga., Brannen attended and played golf at Marietta High School, where he won the Georgia State High School Championship in 1975. He then joined the collegiate ranks at Columbus State University, where he received All-America honors in 1978. That year Brannen also won individual honors at the NCAA Division II National Championship.

In 1980, Brannen returned to Marietta and began his career in the golf business with a role at Canterbury Golf Club. Two years later he joined Atlanta Athletic Club as a third assistant in 1982, where he would stay and gain experience and grow in the profession for the next 18 years. Brannen was promoted to head golf professional in 1989. Over the next few years along with longtime director of golf Rick Anderson, Brannen would develop the Bob Jones Learning Center, the state-of-the-art facility at Atlanta Athletic Club. In 1996, Brannen became the director of instruction for the new teaching center and would remain in this role until 1999.

Brannen’s next move was east to Augusta Country Club, where he was hired as the head golf professional in 2000 and has been a fixture at the club since.

Off the course Brannen has received numerous recognitions and awards for his contributions to the game. Among them included the 2015 Georgia PGA Golf Professional of the Year, certified as a U.S. Kids Coach in 2014, recognized by Titleist in 2008 and 2009 as one of the top 100 club fitters, the 2001 Georgia PGA Merchandiser of the Year for private clubs and the 1998 Georgia Section PGA Teacher of the Year.

In 1996, Brannen became the 175th PGA Master Professional of the PGA of America. He was inducted into the Columbus State University Sports Hall of Fame in 1997 and the Marietta High School Hall of Fame in 2015.

Terri Moody Hancock, a two-time All-America golfer at the University of Georgia and the first UGA women’s golfer to compete on the LPGA Tour, has been selected for induction into the Georgia Golf Hall of Fame.

A native of Athens, Ga., Hancock attended the Athens Academy (1973-77) where she was a two-time state high school champion while competing on the boy’s golf team. She stayed in Athens and enjoyed a successful collegiate golf career at the University of Georgia (1977-81), where she was the first female to receive a full scholarship.

While at UGA, Hancock led the team to 16 victories in a three-year span, including winning five individual titles of her own. In 1981 during her senior year, she won the first individual national championship in UGA women’s athletics history at the AIAW National Championship (pre-NCAA), also becoming just the fourth UGA student-athlete to win an individual national title. For her efforts, Hancock was a two-time All-America and was the 1981 Broderick Award winner for women’s golf as the nation’s top collegiate golfer. She was also the 1981 National Golfer of the Year – only the third UGA student-athlete to win a national player of the year award in any sport.

During her time leading the University of Georgia women’s golf team to victory, Hancock kept a busy competitive schedule of her own. She qualified for the U.S. Women’s Amateur Championship each year while at UGA in 1977, 1978, 1979 and 1980. Hancock received low amateur honors at the 1979 U.S. Women’s Open. In 1980, she was a member of the Curtis Cup Team, where she helped the United States to a 13-5 victory over Great Britain and Ireland, which at the time was the largest margin of victory in the event’s history. She also won the 1976 Georgia Women’s Amateur Championship.

After her collegiate golf career came to an end, Hancock earned her LPGA Tour card and competed on the professional circuit for five years. She then retired from competing on Tour full-time to focus on starting a family.

For her on-course accomplishments, Hancock has been recognized for her contributions. Most recently she was inducted into the Georgia Sports Hall of Fame in 2018, and the National Golf Coaches Association Hall of Fame in 2000. In 1997, she was named to the University of Georgia’s Circle of Honor, which is designed to pay tribute to extraordinary student-athletes and coaches who by their performance and conduct have brought honor to the university.

Bruce Heppler, the longtime men’s golf head coach at Georgia Tech who has guided the program to every NCAA Regional since 1998 and has earned 10 Atlantic Coast Conference Coach of the Year honors, has been selected for induction into the Georgia Golf Hall of Fame.

A native of St. George, Utah, Heppler attended Dixie High School before a brief collegiate golf stint in 1979 at Dixie Junior College, where he received an Associate degree in arts and sciences in 1982. In 1985, Heppler earned his Bachelors degree in accounting from Brigham Young University, and in 1988, his Masters degree in sport management from the University of Massachusetts.

While at Georgia Tech, Heppler has guided the program to an NCAA Regional every year it has been played since 1998, including 18 of those teams advancing to the NCAA Finals. Since 2000, Georgia Tech has finished outside the top 10 in national polls only four times. During his tenure, the Yellow Jackets have won or shared 13 Atlantic Coast Conference (ACC) titles, while capturing or sharing 64 team titles overall.

Heppler has annually recruited and developed talented players from across the globe. The program has had at least two All-ACC honorees in 19 of the last 23 seasons and have had four members of the team honored four times. Three of Heppler’s players have earned national player of the year honors, including Matt Kuchar, Bryce Molder and Troy Matteson. In addition, three former players – Kuchar in 1997, Andy Ogletree in 2019 and Tyler Strafaci in 2020 – have won the U.S. Amateur Championship. With Ogletree’s and Strafaci’s victories in 2019 and 2020, Georgia Tech became the first school to have teammates win the national title in back-to-back years.

In 2002, Heppler led his squad to the best season in school history as the Yellow Jackets won a record seven team titles and finished runner-up at the NCAA Championship. That year, Matteson became the third Georgia Tech player to win an individual national title.

Heppler has been recognized for his leadership many times over the years. Among the honors include the ACC Coach of the Year 10 times, more than any other ACC coach in conference history, as well as the Golf Coaches Association of America (GCAA) National Coach of the Year in 2002. He was named a Georgia Tech Honorary Alumnus in 2018.

William Lewis was a lifelong advocate and contributor to the game who built both a successful playing and teaching professional career touching the lives of many young people, has been selected for induction into the Georgia Golf Hall of Fame. Lewis will be inducted posthumously.

A native of Huntsville, Alabama, Lewis was the oldest of seven children. His father died when Lewis was 10-years-old, and at 11, he started caddying at Huntsville Country Club to help support his mother and family. Lewis attended Lee High School (1966-69) and was the first black member of the golf team. His junior year the team advanced to the state tournament and finished sixth, and his senior year Lewis helped his team win the region and finish sixth in state.

Lewis stayed in Huntsville and enrolled at Alabama A&M University in 1970, ultimately earning a four-year scholarship. He quickly found success in collegiate golf as Lewis was voted Most Outstanding Athlete his freshman year. He led is team to victory at the Southern Intercollegiate Athletic Conference (SIAC) Tournament his freshman and junior years, while the team finished runner-up his sophomore and senior years. Lewis won over 28 tournaments during his collegiate career, earning him Small College All-America honors each year (1970-74). With the success Lewis found in college, he kept his caddying side job to support his family.

His first job after college moved him to Georgia as the assistant golf professional at John A. White Golf Course in Atlanta. During his early working years, Lewis supplemented his income by playing on the mini tour circuit. In the late 1970s, Lewis made the decision to devote time and energy to refining his skills, and a year later, he began playing regularly on the North American Golf Association Tour. After a few years of making a name for himself alongside professionals Jim Dent, Lee Elder and others, Lewis entered PGA TOUR Qualifying School. He won the Atlanta Open in 1978 and the Greensboro Open in 1979 and 1981, before making the finals at Qualifying School in 1981. His first PGA TOUR event was the 1981 Southern Open in Columbus, Ga., and competed in the 1995 BellSouth Classic.

He joined the First Tee of Metro Atlanta when it was founded in 1999 as the head golf instructor and youth coach, where he stayed involved with the chapter for 18 years before retiring in 2017. As head instructor, Lewis touched the lives of many junior golfers in the Southwest Atlanta and surrounding communities; helping young boys and girls qualify for high school teams and earning college scholarships.

Lewis received recognition for his efforts and service to the game over the years. In 2000, he was inducted into the National Black Golf Hall of Fame and the Huntsville – Madison County (Alabama) Athletic Hall of Fame. On February 19, 2016, the Atlanta City Council proclaimed ‘Coach William Lewis Day’ in the city of Atlanta, highlighting his significant contributions to youth and the game of golf. Lewis passed away in February of 2022.