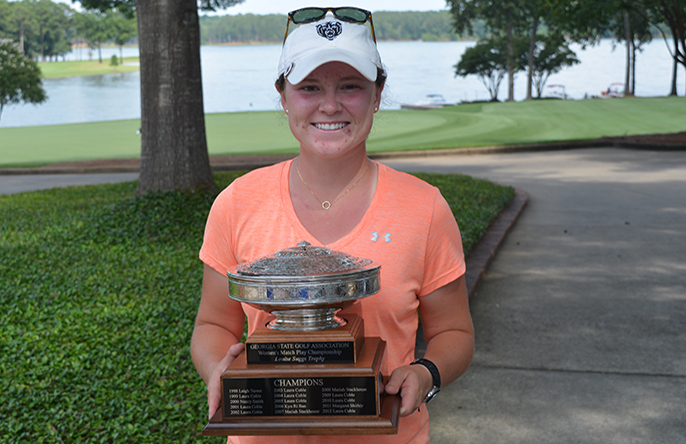 The final match saw Deems take a 1-up lead after two holes before going all square through four. The fifth and sixth went to Deems for a 2-up advantage through six. Up two holes at the turn, Deems claimed three of the next four holes to seal the deal with a 5 and 4 victory over Craig.

Deems, who plays golf at Mercer University in Macon, drove through the bracket with four wins in two days. On Friday, she beat Meghan Nay of Canton in the round of 16 (2 and 1) and Woo Wade of Dunwoody in the quarterfinals (5 and 4). On Saturday, Deems defeated Tess Davenport of Buford in the semifinals in 19 holes. The 20-year-old was the top seed in match play after earning medalist honors with a 3-under-par 141 (71-70) in stroke play qualifying.

Craig earned wins over Payton Schanen of Johns Creek in the round of 16 (3 and 1), Ashley Madden of Stockbridge in the quarterfinals (20 holes) and Katy Harris of St. Simons Island in the semifinals (3 and 2).

In the Tournament flight, a pair of Berry College players competed in the final match. In the end it was Rachel Belanger of Johns Creek beating Jorie Hodapp of Villa Rica in 21 holes.

Coble, a member of both the Georgia Golf Hall of Fame and Georgia Sports Hall of Fame, made her way through the bracket with three wins over two days. She first defeated Leslie Elkins of Roswell, 3 and 2, in the quarterfinals, then Susan Rheney of Greensboro, 4 and 3, in the semifinals. Butler paved her path to the finals with victories over Deb Agran of Greensboro in the quarterfinals (21 holes) and Jill Rhodes of Sandy Springs in the semifinals (1 up). The two finalists kept it all square through the first two holes, but then Coble went on to claim five of the next seven holes to build a lead. Once the twosome made the turn, it was more of the same for Coble as she went on to win the match and the title, 5 and 3.

Ginette Spinucci of Stone Mountain won the first flight with a win over Jean Dawson of Suwanee (4 and 3). In flight two, Janet Norris of Eatonton defeated Jean Franks of Peachtree City in 22 holes. Marilyn Nolan-Johnson of Acworth beat Linda Edwards of Peachtree City, 3 and 2, to win the third flight.

The Women played 36 holes of stroke play qualifying to determine seeds with the low 32 players advancing to match play. The low 16 qualifying scores comprised the Championship flight and the remaining 16 players were seeded into a Tournament flight based on qualifying scores.

The Senior Women played 36 holes of stroke play qualifying to determine seeds with the low 32 players advancing to match play. The low 8 qualifying scores comprised the Championship flight and the remaining 24 players were seeded into three flights based on qualifying scores.